In order to prepare the talk, that my friend Raúl and I will give at Codemotion Spain 2016, I decided to write a series of posts explaining how alarms and sensors work and how Doze mode affects their normal behavior. In the talk, we’ll discuss those topics, the problems that we found along the way creating Drivies and how we have solved such fragmentation issues. Don’t miss it! In this first article, we are going to analyze alarms in Android. Let’s go!

Eventually you might need to schedule a task in background. There are a lot of scenarios when you need to execute something out of the public eye, even if your app is not running. For example, you might need to send a notification at some later time or to check periodically if an event occurred. To implement that kind of operation we use alarms.

Scheduled work on Android can be implemented differently according to frequency, foreground vs. background and your minSdkVersion. In some cases, you can use a simple postDelayed() loop. But, as you may already know, it only works if your process is still alive. If you no longer have a process, the better way to handle the job is to use AlarmManager. JobScheduler, introduced in Lollipop, does the same. For the sake of simplicity, we are going to focus firstly on AlarmManager. We’ll explore the different configuration options, explaining their pros and cons showing how Doze mode affects each. JobScheduler will be covered in a future post.

In order to set up alarms, first of all, we have to know the different options available. Let’s review them in depth.

Below is the list of the different alarm types available.

There are a bunch of methods that you can call on AlarmManager to establish an alarm. Following we are going to describe each.

Warning: On Android 5.1 and higher, alarms must be set to occur at least 5 seconds in the future from now. You cannot trigger an alarm to occur in the future sooner than 5 seconds.

Can you spot the fragmentation issues?? 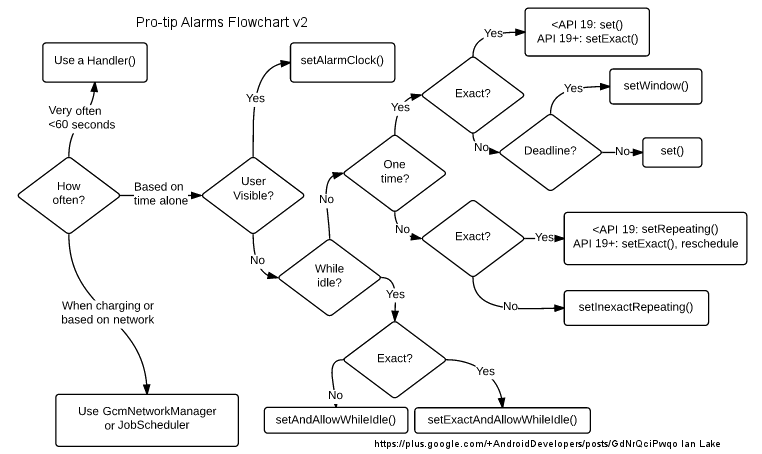 First time I saw it I was all like…

As you may have noticed, working with alarms in Android entails dealing with SDK fragmentation. There a bunch of APIs which do the same thing and you have to master them in advance to ensure your scheduled tasks will work properly. The names of the methods are almost identical and you have to be careful choosing the one that best suits your needs depending on the API level you are targeting. Even some of them are lying based on which OS version is running! That’s really confusing and annoying. Don’t you think so? And I didn’t mention what manufacturers do with them… Yet!

In the next post, we’ll talk about how Doze and App Standby work and how these power-savings optimizations influence alarms. In the meantime, you can check our playground sample repository on Github.

If you want to know how to debug alarms, go check the amazing post of my friend Vito.

P.S. Quick reminder! Feel free to leave a comment below. I’m looking forward to hearing from you.